"MISERY is manifold. The wretchedness of earth is multiform. Overreaching the wide horizon as the rainbow, its hues are as various as the hues of that arch". (Edgar Allan Poe, 'Berenice', 1835)

This condition will never change! But you can, at least, banish it for your mind awhile with 'Evermore: A Choose Your Own Edgar Allan Poe Adventure'!

Containing over 60 of Poe's stories, poems, and essays in adapted, truncated, respectfully disfigured, and exciting "hyper-textual" forms 'Evermore' is the only game with the hubris to connect "all" of the great author's works into one, branching-pathed Leviathan and labyrinthine narrative.

Play, download, or learn more about this game on the IFDB

This was super enjoyable! Great stuff.

Are you still interested in creating interactive fiction? We may have a project for you if you are interested! Let us know and we can get in touch. All the best, Mark

I'm certainly open to discussion! ^^ (especially if it is a collaborative project)

fantastic, do you have an email address we can contact you on?

Sorry, been in hospital with intestinal problems for a couple of days. adamwhybray@gmail.com works fine for now (must really replace gmail sometime soon)

This is gorgeous. I love the BRILLIANT concept and added it to my "must play next" . I'm a full time student and writer and this game stood out to me above all others because of the pure originality.  I just felt I needed to add my appreciation for your creative style here.

Side note: 2 years ago I found a large injured black bird in my yard and took care of it...I called it Nevermore for a few days, but then he became Poe...which he answers to. :)

I look forward to playing this.

That's so very kind of you! Sion did a wonderful job with the art so it's worth playing even for that I believe! ^^
I really hope you enjoy it and that it lives up to at least some of your expectations! It's quite a lot big than most players have realised, I think - there's two main branching paths early on, one which leads to a journey by boat and adventures beyond and one which involved exploring a mansion. It gets more puzzley and properly exploration based as it goes on and I became better at coding! XD

Thanks for this. I was getting a little dispirited about making games in the future, in truth, as I felt like 'Evermore' didn't really click for most people (or the 2 hour competition playtime limit meant that a lot of players didn't realise the sheer expanse of the game) so it really means a lot to know that there are folks out there who enjoyed it! Cheers!

I'm quite sure there were plenty more people than me that did enjoy it, it's just the fact that it seems a relatively small number of downloaders leave comments, so certainly don't be disheartened!

More the responses in the comp itself TBH - I was troubled that more than one commentator felt there was sexist and/or racist humour in the game - doubtlessly, there are racist and sexist aspects to Poe's work and I tried to offer a critical commentary on this, or provide ironic deconstructions, without misrepresenting the original texts. The difficulty in doing this is why I would never attempt such a game with Lovecraft.

Otherwise, it seemed like many people experienced the game as "puzzle less"... in truth, I think the game's design gets more interesting and complex the deeper you get into it, especially in the island section, where there is a fair amount of variable tracking and what I would consider puzzles... I'd like to think that familiarity with the tropes/ structures of CYOA (and especially Fighting Fantasy) books should allow the player/ reader not to brute force the game to reach a desired conclusion.

That is to say, there *are* some unfair endings and responses that cannot be usefully predicted (to keep in with the style of CYOA and also for humour and to allow more illustrations!) but I think if you play it as "cautious but not cowardly" (as those old books often seemed to encourage) you'll probably do okay!

Thanks for playing and enjoying! 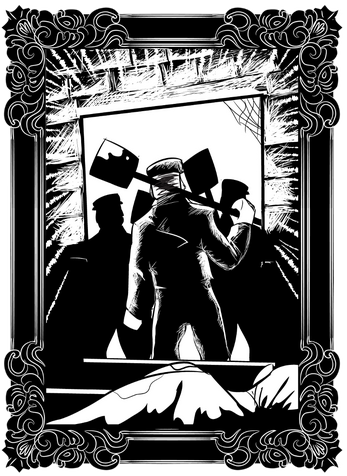